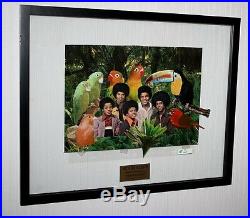 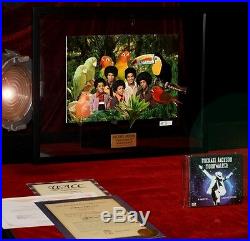 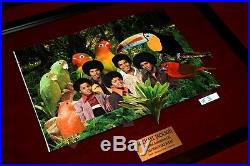 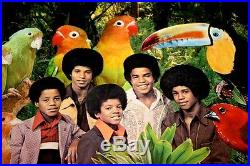 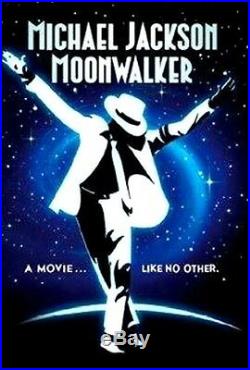 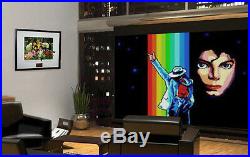 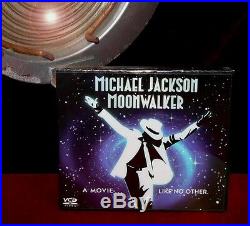 This ANIMATION CEL has NEVER BEEN SEEN BY THE PUBLIC!!! Michael Jackson is a true Music success story. This RARE Animation Cel is being offered by UACC Registered Dealer #228 that was uncovered by D. Movie Director that includes the provenence and complete Certificate of Authenticity (COA)... This was NEVER SEEN BY THE PUBLIC!

One of the Great Animated FILMS! An Original ART CEL from "MOONWALKER, " featuring MICHAEL JACKSON & THE JACKSON FIVE, just ready to display. A Black double glass Frame with the original art nicely mounted with acid free materials with engraved PLAQUE.

Original CERTIFICATE OF AUTHENTICITY from UACC Registered Dealer & D. A widescreen SEALED DVD movie, Limited Issue edition, NTSC, plays worldwide. I've been a D. Director of film & television for over 30 years & I've certainly loved these movies as much as any fan!

You can see this animation cel that is mounted to the standard clear cels with notches at the bottom! This is a sequence that was used in their hit song, "ROCKIN' ROBIN, " but after Michael saw the edited scene in California, he requested that the song be edited out from the final cut! So, no one but Michael and the producers of the movie have ever seen these scenes.. I uncovered some of these "MOONWALKER" cels recently after spending a month visiting friends in Europe... I found where these were being stored and learned how they got from the "Moonwalker" Editor in Santa Monica to my friend in Europe...

Of course, I was thrilled to find these and realize that NO ONE in the PUBLIC has ever seen this animation cel... Of course, that makes this cel VERY RARE and a great piece of MICHAEL JACKSON HISTORY!

This key Cel art has notches, various tape & markings at the bottom of the cel to help position & log where this scene is used in the movie.. This display includes the original CERTIFICATE OF AUTHENTICITY and the original TITLE to the art from THE NATIONAL FINE ARTS TITLE REGISTRATION. Colors are bright and highly detailed... The art measures approximately 13" High x 16" Wide.

This RARE framed Cel is just ready to hange in your Media Room, Office or Museum and could be a great investment that will be enjoyed for generations to come. The silver engraved plaque mounted on the bottom of the display reads. This ORIGINAL MICHAEL JACKSON "Rockin' Robin" ANIMATION CEL should become very valuable and treasured since this scene was cut by Michael and NEVER seen by the public..

This is a VERY UNIQUE FRAME... Instead of solid foam core backing, we matted the cel between 2 pieces of acid free UV museum glass mounted inside the frame, so you can see the entire piece of art, both from the front.... This unique frame can hang or display on the wall... This large framed display measures approximately 20" Wide x 14" High. You also receive a copy of the movie in a SEALED, Special Limited Edition DVD so you can view this vintage MICHAEL Finally, you also receive new, factory sealed DVD, "MOONWALKER, " starring MICHAEL JACKSON & THE JACKSON FIVE.

(DVD, NTSC, plays WORLDWIDE format). This particular "MICHAEL JACKSON" collection includes a RARE Original ANIMATION CEL ARTWORK featuring MICHAEL JACKSON & THE JACKSON FIVE performing "ROCKIN' ROBIN".. Moonwalker , also known as Michael Jackson: Moonwalker , is an American anthology film released in 1988 by singer Michael Jackson. Rather than featuring one continuous narrative, the film is a collection of short films about Jackson, several of which are long-form music videos from Jackson's Bad album. The name of the dance move was dubbed by the media, not by Jackson himself; however, he did choose the title of the film himself. The film is rated Parental Guidance outside of the United States. The release of Moonwalker was originally scheduled to coincide with Jackson's 1987 album, Bad. During the theatrical release of Moonwalker , Jackson was also embarking on the Bad World Tour, his first tour as a solo performer. The film was released theatrically in Europe and South America, but Warner Bros. Canceled plans for a Christmas 1988 theatrical release in the U. Moonwalker was released on home video in the United States and Canada on January 10, 1989, just as the Bad World Tour finished.

His tour was supposed to finish sooner, but had been postponed due to some vocal strain, so it went on until the last week of January 1989. "MOONWALKER" features Michael and the JACKSON FIVE. A WONDERFUL PIECE OF ORIGINAL Animation ART! These Cels are very hard to find in the marketplace and rarely ever made available to the public. Michael Jackson, the sensationally gifted.

Died tragically in Los Angeles... He had been childhood superstar, only to become the entertainment world's most influential singer and dancer before his life ended at his home at 50 years old. Jackson was popular music's premier all-around performer, a uniter of black and. Who shattered the race barrier on. Dominated the charts and dazzled even more on stage...

Michael started with The JACKSON FIVE with Motown Records in the 1970's and they dominated the music charts with numerous hit songs! His 1982 album "Thriller" § which included the blockbuster hits "Beat It, ". He was perhaps the most exciting performer of his generation, known for his feverish, crotch-grabbing dance moves, his high-pitched voice punctuated with squeals and titters. His single sequined glove and tight, military-style jacket were his signature trademarks. What a wonderful & interesting history lesson for any MICHAEL JACKSON fan about art & animation...

And a valuable gift that could become a good investment for the future! This Original MICHAEL JACKSON Animation Cel has been stored in an acid free sleeve in a smoke free environment since being acquired... Check out our other auctions for more Movie Collections that include wardrobe, props & autographs from a variety of TV & Movies. Sell is a Registered Dealer with the U. We are proud that some of our memorabilia is on display in the SMITHSONIAN, Washington, D.

She is perfectly beautiful and the frame is perfect for my room. Let's keep in touch. Thanks for your ideas and emails.

A true "ONE OF A KIND" piece of MICHAEL JACKSON memorabilia. A GREAT piece of MICHAEL JACKSON history & memorabilia..... A real "One of a Kind" Find & Conversation Pieces for both ANIMATION ART COLLECTORS & JACKSON FANS... Movie & Television Art, Props & Autographs can make for a good investment as well! Check out our other auctions for more great items, including more Art , Props & Costumes! Imagine giving this great Original Rare and Never Before Seen MICHAEL JACKSON Animation Movie Cel to the Jackson or Art Collector in your family or just keeping it for yourself for what should be a good investment! A GREAT MOTION PICTURE COLLECTION from a classic film, Michael Jackson's MOONWALKER. WE ALSO OFFER A 3 MONTH LAYAWAY PLAN WHERE YOU CAN MAKE 3 EQUAL MONTHLY PAYMENTS TO US & WE DON'T CHARGE ANY INTEREST....

A VERY RARE & VALUABLE ONE OF A KIND FIND!! You may never see another RARE MICHAEL JACKSON Animation Cel like this ever offered to the public again!