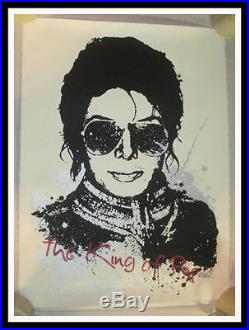 MICHAEL JACKSON - THE KING OF POP. Here's your chance to get this amazing Screen print and stenciled spray paint on textured archival art paper, with reflective silver paint. Size: Print measures 22" x 30" inches and comes in mint condition, ready for framing. Print is hand signed and numbered by the artist and dated 09 with thumb print on back. A must have for all MBW, Michael Jackson, Andy Warhol, Banksy, Graffiti, Lowbrow and Pop Art Collectors! Here is what Shepard Fairey says about Mr.

I want to hug him one second and smack him the next. He is awesome, infuriating, almost impossible to define, but if an artist is defined by relentless, obsessive passion, then MBW is definitely an artist. Which kind of artist though?

When I first met MBW he was a film maker. He started documenting me putting art up on the streets and in galleries back in 99.

He has hundreds of hours of footage and often risked his neck climbing with a camera to very dangerous spots. MBWs camera was ALWAYS on Theoretically MBW is coming out with an OBEY documentary eventually. Somewhere along the way I introduced MBW to Banksy, which seemed to lead him to transition from just a voyeur to a participant, and he began making his own street art. Knowing this art background and his obsessive nature, it does not surprise me how quickly MBW rose to prominence with his street art, becoming one of the most up people in LA in a short amount of time. Not all of the work was magnificent, but it improved steadily, reflecting the maxim that practice yields results.

Meanwhile, in addition to his street art, as flows logically, MBW was also making canvases and screen prints that could be shown in a gallery. In his usual style, MBW could not just do a small art show, he had to go completely over the top and put together one of the largest, most ambitious, non-museum shows I can think of (more detailed description below).

Of course nothing can go smoothly with MBW and over the weekend he wrecked his car and fell off a billboard breaking his foot. A less insane person would have postponed their art show, but he instead postponed his foot surgery and is continuing work.

With the ambition and commitment MBW has, Im pretty sure hell pull the show off, but if he doesnt, to paraphrase Malcolm Mclaren, a glorious failure is better than an underwhelming success. I will be playing records and a jazz band will perform, so it is going to be a good party. Here is what Banksy has to say about MBW. Brainwash or MBW is the moniker of an eccentric French filmmaker.

MBW has spent the last nine years attempting to make the ultimate documentary about graffiti art. But whilst filming many of the worlds most renowned street artists at work MBW began putting his camera aside and making art of his own. He has graduated from a few hand drawn stickers to giant billboard sized paste-ups, eventually becoming one of the most prolific street artists in California.

MBW does not fit the stereotype of your average street vandal. His artistic process chiefly consists of throwing random modern cultural icons into a blender and turning it up to eleven. The results are by turns profound, provocative and inspirational. Life is beautiful is the first exhibition ever mounted by Mr Brainwash. It takes place in a former Hollywood studio complex and will feature over three hundred paintings, sculptures and prints alongside an installation made from 100,000 shoes and a life-size re-creation of Edward Hoppers Nighthawks.

Brainwash is a force of nature, hes a phenomenon. And I don't mean that in a good way. The item "MR BRAINWASH MICHAEL JACKSON KING OF POP S/N SCREEN PRINT MBW SOLD OUT & RARE" is in sale since Thursday, October 8, 2015. This item is in the category "Art\Art Prints". The seller is "wackyfunshop" and is located in Los Angeles, California.