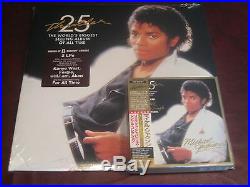 MICHAEL JACKSON - Japanese OBI MINI REPLICA TO THE ORIGINAL 25TH ANNIVERSARY SET WITH ALL THE JAPAN SINGLES COLLECTION TITLES OF THE THRILLER LP IN A CD Box Set - THIS IS OUR ONLY SET FOREVER AND COMING TREMENDOUSLY RARE/VALUABLE & OUR LAST BOX FOREVER + FOR THE COLLECTOR WHO WANTS IT ALL THE 25TH ANNIVERSARY VINYL LP SET. A LOT OF BONUS WITHIN THIS COLLECTION. Japanese OBI MINI REPLICA BOX SET. WHAT IS A JAPAN "MINI-LP-SLEEVE" CD? Have you ever lamented the loss of one of the 20th Century's great art forms, the 12 vinyl LP jacket? Then "mini-LP-sleeve" CD's may be for you. Mini-sleeve CDs are manufactured in Japan under license. The disc is packaged inside a 135MM X 135MM cardboard precision-miniature replica of the original classic vinyl-LP album. Also, anything contained in the original LP, such as gatefolds, booklets, lyric sheets, posters, printed LP sleeves, stickers, embosses, special LP cover paper/inks/textures and/or die cuts, are precisely replicated and included.

An English-language lyric sheet is always included, even if the original LP did not have printed lyrics. Then, there's the sonic quality: Mini-sleeves have dedicated remastering (20-Bit, 24-Bit, DSD, K2/K2HD, and/or HDCD), and can often be superior to the audio on the same title anywhere else in the world. There also may be bonus tracks unavailable elsewhere. Each Japan mini-sleeve has an "obi" ("oh-bee"), a removable Japan-language promotional strip.

The obi lists the Japan street date of that particular release, the catalog number, the mastering info, and often the original album's release date. Bonus tracks are only listed on the obi, maintaining the integrity of the original LP artwork. The obi's are collectable, and should not be discarded. All mini-sleeve releases are tremendously limited editions mainly pressed on future orders only and once released immediately out of print. Special VERY RARE LIMITED EDITION BOX SET ONLY PRODUCED ON FUTURES FOR THIS ONE TIME PRESSING -- were only available in Japan.

& TYPE IN OBIBOX OR MICHAEL JACKSON INTO THE SEARCH FIELD WITHIN OUR STORES SECTION AS YOUR PERSONAL CODE AND ALL INDIVIDUAL TITLES + INFORMATION WILL APPEAR. THE TRACKS AND EXTRAS AND BOOKLET - 7 CD SINGLES WITH THESE SONGS.

THE GIRL IS MINE/CAN'T GET OUTLA THE RAIN. BILLIE JEAN/IT'S THE FALLING IN LOVE. BEAT IT/GET ON THE FLOOR. WANNA BE STARTIN SOMTHIN'/WANNA BE STARTIN SOMETHIN'S INSTRUMENTAL. THRILLER/THINGS I DO FOR YOU (LIVE) It's impossible not to hear the songs from this album from time to time, yet it had been a long time since I heard the original album in total, tracks 1-10 on this CD.

When you listen to it again, it's impossible not to realize how amazing of a production this truly was, and still is even 25 years later. Every single song is a number one hit, and Michael moves through genres including pop, rock and R&B with ease.

See my awards summary at the bottom for more on this. The remakes can't possibly match Michael's original accomplishment.

Yet they are not as bad as many say. I actually like the Akon version of Wanna Be Startin' Somethin. " And Kanye West's "Billie Jean mix highlights his abilities as a producer.

There's also the Motown 25 performance of Billie Jean. For those that don't remember this performance, it's the one where Michael first does the moonwalk on stage. It takes quite a performer to pull off a rhinestone shirt, rhinestone socks, sparkly jacket, high-waters and one white glove! It's amazing to note that Michael Jackson actually wrote most of the biggest hits on this album, something today's R&B artists rarely do. Most of the biggest hits from the album are his original works, including "Wanna Be Startin' Something, " "The Girl Is Mine, " "Beat It, " and Billie Jean. " "Baby Be Mine, " "Thriller, " and "The Lady In My Life were written and composed by Rod Temperton. "PYT" was the work of the legendary James Ingram and Quincy Jones.

And Steve Porcato wrote both "Human Nature" (with John Bettis) and the newly released "For All Time" (with Michael Sherwood), number 16 on this edition. I really liked this previously unreleased track, and it definitely has a sound akin to Human Nature.

I can only speculate that that similarity is what kept it off of the original release. AWARDS It's amazing to think this album won 8 Grammys, and I don't even believe it was close in any category.

+ Album of the Year + Record of the Year ("Beat It") + Best Male Pop Vocals ("Thriller") + Best Male Rock Vocals ("Beat It") + Best Male R&B Vocals ("Billie Jean") + Best R&B Song ("Billie Jean") + Producer of the Year (Qunicy Jones and Michael Jackson) + Best Engineered Recording, Non-Classical (Bruce Swedien) If there had been awards for best music video back then, "Thriller, " "Billie Jean, " and "Beat It" would have all been nominated. CONCLUSION This is a pivotal album that is well done here at an affordable price when you factor in all the cool stuff that's included. While some collectors will want to own both this version and the Deluxe Casebook Edition, I think the regular 25th Anniversary Edition has enough extras to satisfy most fans. These are Japanese digitally re-mastered Mini LP replica CDs (the OBI Edition).

A deluxe, Gatefold 180-gram 25. Anniversary DOUBLE LP Edition of one of the most significant pop releases in music history! Includes a bonus LP with previously unreleased tracks, mixes and an unreleased song from the.

(England, Ireland, Wales and Scotland), SOUTH AMERICAN COUNTRIES, QATAR, PHILIPPINES, SRI LANKA, ISRAEL, RUSSIA, MEXICO and MALTA. Mymusicfix has been told we have the best collection of Rare, Out of Print music collectibles on E-Bay.

The seller is "mymusicfix2" and is located in Lake Forest, California. This item can be shipped worldwide.