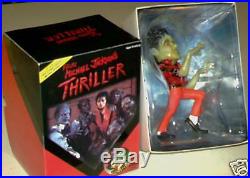 This is an exclusive glow-in-the-dark version of the figure, which was only available at the 2009 Comic Con in San Diego, CA. The figures are limited to 120 world wide. There's no denying that his smash-hit album Thriller and the unforgettable video for the title track have left an indelible mark on American pop culture. This astonishing, 7-inch tall, vinyl figure represents Zombie Michael from the Thriller video.

Any Jacko fan would be thrilled to own it. Get it now because it's gettin' close to midnight! Figure is new and has never been removed from his box. Please see my other Michael Jackson items by clicking next the little red door on my store Pachum.