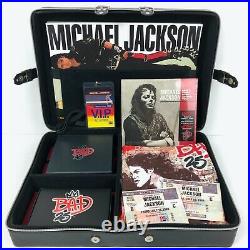 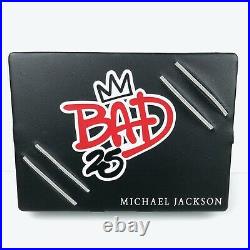 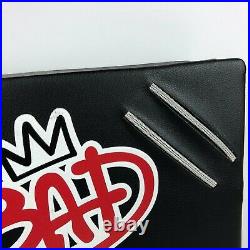 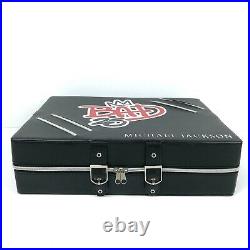 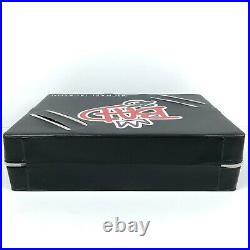 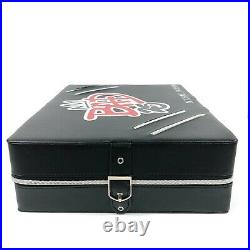 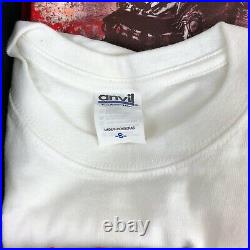 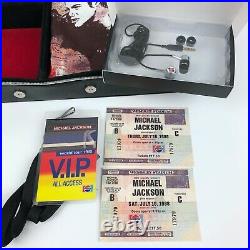 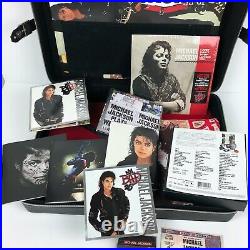 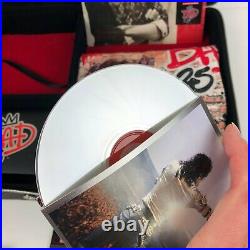 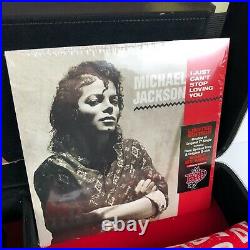 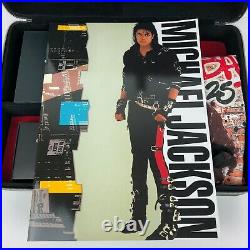 It was opened once and admired and has been displayed closed on a shelf with no direct sunlight since then. At that time I took the original plastic wrap off and some plastic around the interior items such as the headphone box (never used or took out).

The I Just Can't Stop Loving You vinyl is still in the plastic. The CDs were not listened to. The shirt inside is a size small and was never worn. From a smoke and pet free home.

The adhesive surrounding the zipper detailing on the front exterior of the case has begun to slightly lift naturally with time. It could easily be glued down if you desire, but I have left it as is. This is a rare find and one of the best MJ items in my personal collection, but it's time for someone else to enjoy it!

The BAD 25 Deluxe Collectors Edition is the ultimate fan experience. This limited-edition collection includes a variety of rarities and memorabilia, enclosed in a unique BAD-themed case (complete with buckles). The package includes everything contained in the Deluxe 25th Anniversary Edition. / 1 DVD and all other components plus an exclusive t-shirt design (not available anywhere else), a BAD Tour souvenir package (a concert ticket replica, a reproduction of the 1988 BAD Tour Program and an all-access backstage pass and lanyard) and more. This beautiful, must-have collection is available only through the Michael Jackson webstore.

Filled with previously re-mastered versions of iconic hits and un-released recordings from the King Of Pop, the BAD25 Anniversary Deluxe Edition CDs and DVD will include the following. CD one features re-mastered versions of Michaels biggest hits on the original BAD album, including, Smooth Criminal, Man In The Mirror, Bad, Another Part of Me, The Way You Make Me Feel, and Dirty Diana arranged in the same sequence as they appeared on the original album released 25 years ago. Leave Me Alone was added to the album as a bonus track following its initial release and has been included on the disc. CD two offers fans a rare listen to thirteen additional tracks, 6 of which are previously unreleased demo recordings created at Michaels personal studio built at his then-home on Hayvenhurst Avenue in Encino, California. Also included are all three bonus tracks from the 2001 expanded edition of BAD, the previously un-released French version of Michael performing the classic, I Just Cant Stop Loving You, a high power version of Speed Demon remixed by Nero and the brand new remix of Bad worked on as an electrifying collaboration between Pitbull and Dutch DJ Afrojack.

Recordings included in this package reflect the songs and spirit of Michael Jacksons artistry during BADs recording sessions and have been selected to show the different stages of how Michaels songwriting and recording genius took shape. Some tracks are so complete that any other artist but Michael Jackson who worked tirelessly to make sure his songs reflected his vision might consider them finished tracks.

Others are less complete but offer insight into Michaels creative process in its various stages. Included is the demo, Al Capone, an early incarnation of what ultimately became Smooth Criminal, Dont Be Messin Around, an example of a more complete demo, and a song initially titled, Song Groove. That song later became known as Abortion Papers which according to Michaels own records, he spent considerable time in weighing how best to thoughtfully address something that was, and remains, a very personal and sensitive issue. CD three and the DVD A true highlight of the package is the never seen before live concert on DVD and its accompanying music CD of Michaels legendary July 16, 1988 concert at Wembley Stadium. The DVD was sourced from Michael Jacksons personal VHS copy of the performance as shown on the JumboTrons during the concert.

This footage was only recently unearthed and is the only known copy of the show to exist. The visuals have now been restored and the audio quality enhanced so that fans can share in the excitement of that famous night in 5.1 surround sound taken from the original multitrack recordings made that night. In addition to the complete Wembley Show, the DVD will also contain The Way You Make Me Feel from Michaels July 15th performance at Wembley Stadium. This is the only song not performed on July 16th due to the late start of that nights show.

Also included are the thrilling early performances of I Just Cant Stop Loving You and Bad from the Yokohama Stadium performance in September of 1987 during the first leg of the BAD World Tour. This magnificent 3 CD/1 DVD box also includes two extensive booklets with yet unseen photos from the recording sessions, video sets and the concert tour, the original BAD cover art, a two-sided poster and more. The Way You Make Me Feel. I Just Cant Stop Lovin You.