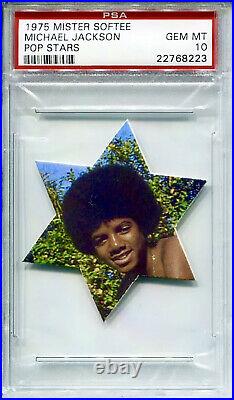 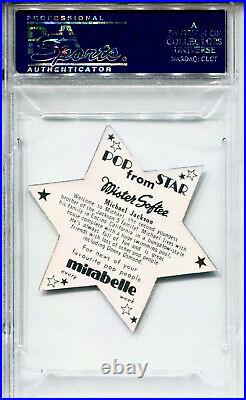 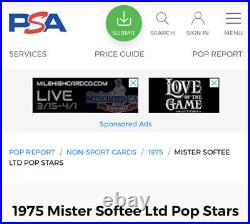 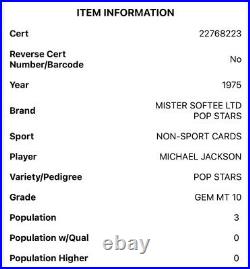 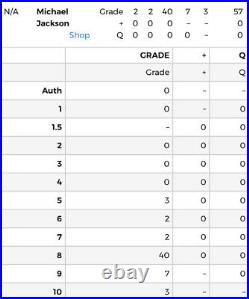 The 1975 Mister Softee Series Featuring The King of Pop and Rock n Roll Hall of Famer Michael Jackson Graded PSA 10! Population 1 of only 3 Examples in PSA 10 Existence! This Particular Card Has 6 Unique Corners Making it Exceedingly Difficult and Virtually Nonexistent to Grade Above a psa 8 and is shown in the psa population report with the photos which has continued to remain virtually unchanged through the years. The Condition Looks Amazing and is Sharp and Clean on Both Sides of The Card Displaying Exceptional Illustration of Michael Jackson on The Front with Perfect Color and Clarity including a Complete Backside Exhibiting All of its Biographical Print and Text Completely Present. Michael Jackson was Inducted into The Rock n Roll Hall of Fame Twice Which Included The Jackson Five and His Legendary Solo Career Along With a Total of 320 Awards and Nominations and is Shown With The Photos on an Unprecedented Accomplishment Never Acheived By Any Other Artist in History.

During The 1980s Michael Jackson Was a Phenomena on a Worldwide Level with Cutting Edge Music Videos and Touring The Entire Globe Ultimately Changing The Music Industries Landscape For Years to Come! A True Michael Jackson Early Career Rarity While its Available.

The seller is "**gallery-of-greats**" and is located in Chatsworth, California. This item can be shipped to United States.